Writers so often are told to end chapters with cliffhangers but unless this is Jason Bourne you’re writing about readers are going to grow weary of that action-packed ending every single time. 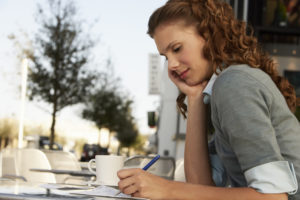 Another theory is to end before a big reveal so the reader must keep reading to find out what IT is. This is not always a seamless approach. It can sometimes feel disjointed to end right before an answer, reason, truth, or other bit of important information, is shared. If it works, then fine—I recommend reading it aloud for flow and having beta readers give their opinions. If it doesn’t work, though, don’t be afraid to go ahead and end a chapter with the reveal. The reader will be compelled to keep reading to see the reaction. It’s the reaction that is the most important element because what’s a reveal without a reaction, right?

As an example, The War That Saved My Life by Kimberly Brubaker Bradley:

<Spoiler alert!…though I’ll try not to give away much>

An important character shows up later in the story. (The reader knows this has to happen at some point. It’s inevitable.) In the scene the main character approaches, sees the person that has suddenly shown up, and the author ends the chapter by naming the person. Maybe a different choice could have been made and the name not revealed, but there would be no point to that choice. The reader was anticipating this person’s return to the story. Just tell the reader because, guaranteed, they are going to read the next chapter to find out the reaction—and not only the reaction of the main character, but of everyone in that scene.

This supports the idea of ending a chapter with a question—not a question with a question mark—but with an unanswered something. An intrigue. In the above example, the question is: How will everyone react to this person’s sudden appearance? I feel like that is a more compelling question than Who is the person who just showed up?

Maybe it varies depending on genre—I mean, I don’t write thrillers or high suspense, so that could call for a specific kind of chapter ending. Still variety can go a long way towards keeping a reader engaged.

Maybe it’s a writing style but cliffhangers and withholding information doesn’t seem to work for me. Because of this I’ve been forced to analyze my own chapter ending style—why did I choose my endings and why do I think they worked? I’ve created a brick and tower theory.

Whatever situation, plot point, or character you are dealing with in the chapter—your ending is like laying another brick on that situation. You’re making it weightier. In a romance maybe the girl is becoming just a little bit more accepting of the guy (she’s not quite as annoyed with him as she was in the beginning of the story)—a brick. Maybe something goes wrong between two friends—a brick. As each chapter goes by more and more bricks are added to the different towers of the particular situations that the chapter deals with. A book will have many towers.

These bricks pile up, but that’s not all they do. There’s a method to this mad tower-building. Somewhere in the back of the reader’s mind whether they realize it or not they will keep reading because they know that tower has to fall. That tower that you are building (the tower of that romantic relationship, that friendship, that “fill in the blank” situation) is going to come crashing down, and they can’t wait to see it fall. They want a front row seat. And they will keep reading…and reading to see how the main character picks up the pieces of those broken bricks. It’s this piecing together that brings about the resolution to the story.

You can also think of it like those buckets you see in water features at public swimming pools sometimes—they fill up more and more and more and then by sheer force of nature they tip and all the water crashes down, drenching everyone underneath. Do you ever stand there and watch the bucket and wait for that tipping moment? That’s what your reader does. They think, “I gotta see this fall.” Each chapter ending adds water or adds a brick to your story. Each one adds weight to the situation for good or for bad. With each one your reader is hooked and must keep reading to find out what happens next.