Welcome to our inaugural edition of Staff Picks, sharing books that Apache Junction Public Library staff have recently enjoyed. Follow the link for each title to put it on hold. You can choose to pick up your holds either in the library or at our drive-up window!

The Better Liar by Tanen Jones, published by Ballantine Books; recommended by Vicki

A stipulation in her father’s will forces Leslie to track her sister Robin to a Las Vegas apartment where she lay still warm following a deadly overdose. Panicked, Leslie flees from the room and recruits a young woman she meets at a local restaurant to assume Robin’s identity in return for half of the estate. Told from the POV of all three women who confess confusing motives and unreliable memories, and manipulate each other and the reader. These unlikable, yet compelling, characters cast a sinister cloud over the bright Albuquerque skies as the charade continues to the climax. A masterful, twisted debut novel.

The Vanishing Half by Brit Bennett, published by Riverhead Books; recommended by Diana
The Vanishing Half is a story about identical twins, Stella and Desiree Vines, born in a small southern Black community. At age 16 they decide to run away and seek life elsewhere. Everything about their lives changes. No longer living together identical twins as one, they live their own separate lives. Everything is different: their families, their communities, their racial identities.  Born to one Black and one white parent, Stella lives her life as white and Desiree eventually returns to her Black community. The story covers several generations of this family, from the Deep South to California, from the 1950s to the 1990s.

Real Men Knit by K.M. Jackson, published by Jove; recommended by Tracie
Four brothers attempt to reopen their adoptive mother’s Harlem yarn shop after her unexpected death.  RomCom is a new genre emerging, according to book critics, and Real Men Knit has family issues, romance, community, and did I say romance?

How Sweet It Is by Robin Lee Hatcher, published by Thomas Nelson; recommended by Sandy
I really enjoyed this book!  This is a contemporary story of faith interwoven with letters from a great grandparent and their life journey. I especially liked the insight into life in the 1940s which included some fun facts. Do you know when the government started Social Security? This book reinforces that there are many different perspectives to every situation. Life is all in the way you look at it!

No Offense by Meg Cabot, published by William Marrow; recommended by Leah 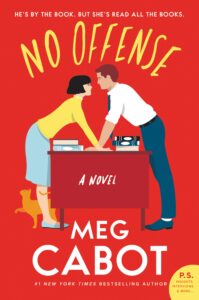 No Offense is an exciting novel about a librarian and a sheriff. As the two work to solve a local crime, you get a small sneak peek into the life of a librarian. So while you enjoy a new book, go behind the scenes with Molly Montgomery and discover new things!

American Dirt by Jeanine Cummins, published by Flatiron Books; recommended by Dennis
This is the story of a Mexican mother and son’s escape from Mexico after their family’s comfortable life in Acapulco is destroyed by drug cartel violence. The mother and son become migrants traveling to the United States to get out of the reach of the cartel.  Along the way they meet others running away from life situations and toward the hope of a better life.

The book doesn’t take a stand about illegal immigration, but made me analyze my views and reminded me that no one knows the details of a person’s life circumstance.

the best-selling H is for Hawk, MacDonald waxes lyrical in these gathered essays on subjects as varied as the fascination of an eclipse and the pitfalls of pushing goats. Her work is informed always by her love of all things natural. She describes herself as, “an odd, solitary child with an early and all-consuming compulsion to seek out wild creatures.” Fortunately for her readers, she fulfilled this goal. Along the way she learned to write in such a way that we, too, feel the magic. Her words weave the world as she sees it, and a lovely and interesting world it is. Part memoir, part discovery, these essays teach us much about the quiet and sometimes hidden beauties that surround us.