In honor of the return of Derby Day – Saturday, September 5th – take a look at some of the titles below, originally selected in April of 2020.

Traditionally, the first Saturday in May is for the redheads (chestnuts edge out bays cr 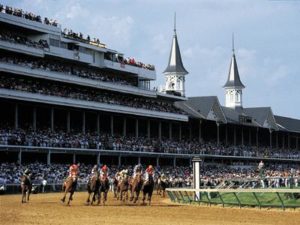 ossing the finish line). No matter the conditions, the Kentucky Derby has run at Churchill Downs since 1875, and is easily the most recognizable horse race in the world. But what Ma Nature couldn’t corral, Covid 19 could, and the Run for the Roses is sidelined until the first Saturday in September. But, horse lovers, don’t despair. The September start give the colts time to develop more bone, and you time to catch up on the winners listed below. Mint Juleps, anyone?

Bloodlines: The True Story of a Drug Cartel, the FBI and the Battle for a Horse-Racing Dynasty by Melissa Del Bosque
Bones: Brothers, Horses, Cartels, and the Borderland Dream by Joe Tone

Covering the Zeta Cartel and their leap into Quarter Horse racing, both of these titles are sure to appeal to horse lovers and true crime fans alike. Bones: Brothers, Horses, Cartels, and the Borderland Dream was a Southwest Book of the Year pick.

Horse Heaven by Jane Smiley
A Pulitzer Prize recipient, Smiley narrates this fast paced coast to coast racing tale in a multitude of voices – including Just a Bob, a seasoned campaigner who wins his races by a bob. Ambitious and awe-inspiring.

In A Year at the Races: Reflections on Horses, Humans, Love, Money & Luck, Smiley lovingly chronicled her bouncy ride as the novice owner of fledgling thoroughbred race horses – including hiring an animal communicator.

Lean on Pete by Willy Vlautin
Lord of Misrule by Jaimy Gordon
While both of these novels are unflinching depictions of low-rent dirt tracks and $1000 claimers, (Lord of Misrule won the National Book Award), my money is on Lean on Pete. Vlautin is a master of placing lost cases into seedy places, and captures the heartbreak and occasional triumphs of life on its last legs.

Covering 1,000 kilometers in 10 days, The Mongol Derby takes endurance races to a whole other level. Novice rider and writer Prior-Palmer details her experie 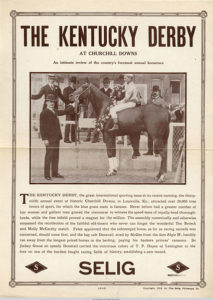 nces that started on a whim and resulted in winning the race.

Seabiscuit: An American Classic by Laura Hillenbrand
Worthy of it many awards, this stylish depiction of both the horse and era catapulted Hillenbrand into the national spotlight.

Secretariat by William Nack
I still remember where I was when Secretariat won the Belmont Stakes by 31 lengths, prompting track announcer Chic Anderson’s inspiring call, “Secretariat is alone. He is moving like a tremendous machine!” Read this touching tribute for an in depth study of Big Red and the unrivaled writing of Nack – a 23 year veteran reporter with Sports Illustrated. To learn more of Nack’s storied career, click here.

Secretariat
Produced by Disney and roughly based on Nack’s book, a heartwarming (though not as meaty) film.

This is a small field of quality horse racing material. What would make your list?

Remember, though the building is closed, you can place holds and pick them up at our drive-thru window.