All lectures in this series will be held in the North Wing Program Room, on Tuesdays at 2:30 PM.

January 7 – Vera Walters, “Exploring Arizona”
Places to see, people to meet and things to do – Arizona has it all.  Our instructor, who has been exploring Arizona for over 40 years, will give you more ideas than you could fit into a lifetime, answer questions about places you know and share information about interesting places you’ve probably never heard of before. Bring some ideas of your own to share and prepare to make an Arizona Bucket List.

January 14 – Erik Berg, “Aviators and the Archaeologists: The Lindberghs’ 1929 Aerial Survey of the Southwest”
Famous pilot Charles Lindbergh (the “Lone Eagle”) is best known for his pioneering 1927 flight across the Atlantic Ocean, but few people know that Lindbergh and his wife Anne, also played an importa 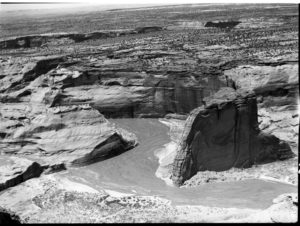 nt role in southwestern archaeology. Come see some of their amazing aerial photographs, and learn how Charles and Anne helped share Chaco Canyon, Canyon de Chelly, and the Grand Canyon with the rest of the world.

January 21 – Carrie Cannon, “For the Love of Turquoise”
Turquoise has a long standing tradition amongst Native cultures of the Southwest, holding special significance and profound meanings to specific individual tribes. Even before the more contemporary tradition of combining silver with turquoise, cultures throughout the southwest used turquoise in necklaces, earrings, mosaics, fetishes, medicine pouches, and made bracelets of basketry stems lacquered with piñon resin and inlaid turquoise. Found on six continents across the world, turquoise forms in arid regions through the process of water seeping through rock and interacting with copper, aluminum, and iron deposits. In the southwest, used decoratively for millennia, this iconic art form has a compelling story all its own. This talk explores a long tradition of distinctive cultural styles, history, and transition of this wondrous stone.

January 28 – Laura Tohe, “From ‘Chief’ to Code Talker: Four Profiles of the Navajo Code Talkers”
During WWII a group of young Navajo men enlisted in the Marines without knowing that they would be called on to develop a secret code against the Japanese military. This select group of Code Talkers devised a Navajo language code that was accurate, quick, never broken, and saved many American lives. This talk profiles four Code Talkers who reflect on their lives growing up on the Navajo Nation homeland, their military service as Code Talkers, and the personal and spiritual costs of war that many struggled with after the war. They returned home without fanfare to continued poverty and lack of economic opportunity, yet persevered and overcame obstacles that helped change the Navajo Nation and their communities. Their stories are told with poignancy that reflect their resiliency and self-determination.

February 4 – Greg McNamee, “The Gila: River of History”
Six hundred miles long from its source in the mountains of southwestern New Mexico to its confluence with the Colorado River above Yuma, the Gila has been an important avenue for the movement of birds, animals, plants, and peoples across the desert for millennia. Many cultures have sprung up on its banks, and millions of people depend on the river today—whether they know it or not. Gregory McNamee, author of the prizewinning book Gila: The Life and Death of an American River, presents a biography of this vital resource, drawing on Native American stories, pioneer memoirs, the writings of modern naturalists such as Aldo Leopold and Edward Abbey, and many other sources. Think of it as 70 million years of history packed into an entertaining, informative hour.

February 11 – Li Yang, “China Mary: History and Legend”
A 1960 episode of The Life and Legend of Wyatt Earp, the first Western television series, immortalized China Mary as a strong, powerful and ruthless Asian female figure in American popular imagination. The legend of her as an infamous Dragon Lady who ruled Tombstone’s Chinatown with an iron fist cannot be substantiated by historical research. Yang’s presentation will debunk the myth of China Mary and tell the real story of her as well as other Chinese who lived in Tombstone, Arizona during the exclusion period.

February 18 – Vera Walters, Museums of Arizona
There are more than 60 museums in Arizona.  How many have you visited?  Our instructor loves to visit museums and factories all over the world and has been to most of those here in Arizona.  She will share information about interesting places you may want to discover and answer questions about some you may have already heard about.  Be ready to share some of your own “must visit” museums.